I'm constantly trying to think of ways to document our lives. We've done family journals which was good if you just have a family of girls. In my experience getting boys to write anything is a big challenge. Right now I've scaled the journaling down to the book Q&A a Day For Kids, by Betsy Franco. It's a 3 year journal with just a daily question for kids to answer. This is a way to capture some of the thoughts of a kid as they grow up. I also have this blog that I post to every once in a while. But, I've been looking for something more.  The kids grow just so fast, and I've been wanting a way to just capture our every day lives for them to remember. You know those little moments that you will be sad are long gone when they have grown up. I'm a more visual person and there are things that pictures can capture that writing can't, and vice versa. But, because the kids are still young and it's like pulling teeth to try and get some of them to write their thoughts and feelings down, I decided to go with the visual.
I decided I wanted to take little snapshots of our days-- just one or two --- and be able to post them in an online journal. I don't own a cell phone ---- I know that is shocking to so many of you, but I don't. Most people are able to do this with instagram and programs like that. But because that isn't an option for me right now, and I'm not sure if I want it to be, I've decided to go with Tumblr.
On the side bar there is a link to my page. It's called Unforgotten Moments. I will load daily pictures with a date and sometimes a caption, and that's it. Easy. No long blog post, just a visual journal of the little, simple, every day stuff. I have big plans to be able to put all these snapshots in a photo book at the end of the year, and continue it every year.
I will still blog here when I want to say more and explain things we may be working on.
I would welcome anyone that wants to join me on Tumblr!
Here are the pics for today: 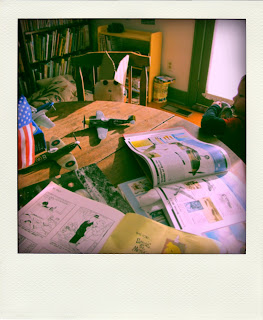 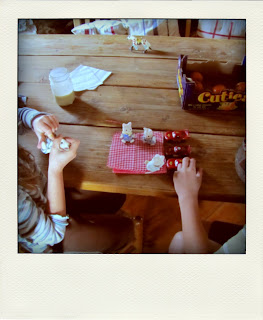 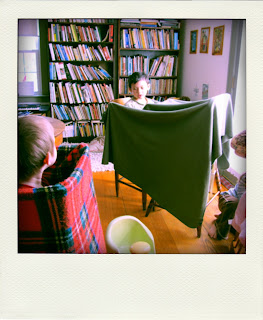 This past month has made us a little tired with a newborn in the house that doesn't like to sleep at night. We did manage to get some Halloween celebrating done though. Not as much as the kids prefer but oh well.
We we able to do a few quick crafts. We made these little felt pumpkins and squashes that I found on pinterest.

We also decorated some halloween plates. Malachi has really been into the Legend of Sleepy Hollow this Halloween so he did a drawing of the headless horseman.

The parents got treated to a Halloween play directed by Malachi.

The kids carved their pumpkins all by themselves this year. They don't have the most creative designs but I guess that will come with age.

A few years ago I made these mummy hot dogs for Halloween, and the kids have begged for them ever since. So they had a lovely nutritious lunch of mummy hot dogs.

Amelia was Raggedy Ann for Halloween, and thank goodness their Grandma Freeman agreed to make her costume! She was such a cute Raggedy Ann!

Malachi is studying the Middle Ages this year for history so he asked his Grandmother to make him a Robin Hood outfit. He dresses up in this almost every day. He takes this very seriously!

Elijah changed his mind constantly with what he wanted to be for Halloween. We tried to get him to be a pirate, but he wasn't going for it. At the last minute he picked out Malachi's old bat costume from the dress-up box. But, he didn't want to paint his face black and he didn't want to wear the ears.

Before the trick or treating we had a meal of bloody eyeballs!

Hope everyone had a good Halloween!

Pin It
Posted by Laurie Freeman at 7:57 AM No comments:

Baby number four is finally here. Nine mos. is such a long wait! Her name is Coralie and she is just as
precious as can be.

.  Finally the kids are done asking me when she will be born.

After the time in the hospital we were able to go home and try to get back to normal. When we got home we found all of these little welcome home banners everywhere.
My mom was here from Virginia taking care of the kids and helping them stay busy. Thank goodness
for moms!!


I like the little swag of dead pine branches as decoration.

a bouquet of flowers from Amelia to her new little sister.

a couple of weeks before Coralie was born I was able to knit this cocoon for her to snuggle in while she's so little.
Now it's the "Can I hold the baby now?" So, she gets passed around and around, but she enjoys looking at them and listening to all their giggles.

Welcome to the family baby girl!
Pin It
Posted by Laurie Freeman at 9:34 AM 4 comments:

What a new post?! Well, I thought I should post something this year. Now is the time to do it because in September the new baby will be here and things will get really busy. I can see the light at the end of the tunnel for this pregnancy. It has been a rough one. I've decided that I'm a horrible pregnant mom. For the first five and a half months I'm so sick that I could care less what is happening around me. The kids can eat whatever they want and do whatever they want and I don't bat an eye. The rest of the time I am purely exhausted and try to move as little as possible. So as you can imagine things have been a little upside down around here. But, I thought I should post something before baby number four is born. A girl by the way!!

Malachi turned eight. I can't believe I have an eight year old.

a gift for a friend

I hate it when the kids are invited to birthday parties. Is that bad? I hate it because then they want birthday parties of their own, and I hate putting together birthday parties. And I also hate buying presents for kids that the last thing they need is another toy. That is the story of American kids these days---mine included---they have everything, and the toys drive the parents crazy!! So, I tell the kids they have to make the presents for their friends. This forces them to be creative and to work on developing a skill. Luckily, this particular friend was a girl---they tend to be easier to make gifts for--- and she likes to play with dolls. So, Amelia and I put together a little doll quilt. She was much more proud of this present than one she would have bought at a store. You can't beat that. Pin It
Posted by Laurie Freeman at 9:28 AM 1 comment:

Today is Winter Solstice, and normally we would be busy making paper snowflakes and other activities, but today we are busy packing for our trip to Virginia instead. Christmas is only a few days away, and it has come so quickly! I didn't even get half the stuff done that I planned.
Posted by Laurie Freeman at 7:56 AM 1 comment:

Someone very important in our home turned three a few weeks ago.
Posted by Laurie Freeman at 3:01 PM No comments:

Laurie Freeman
We like to fill our days with sewing, knitting, crafting, cooking from scratch, learning, and playing.

What we are currently reading

What we are currently listening to